[A swoosh of static gives way to an ‘insert disk’ icon, accompanied by two electronic bleeps. Rudimentary wireframe graphics flit over the screen as choral singing emanates from the television speakers, accompanied by a clanging industrial beat.  The wireframe shapes resolve into a kind of gothic throne, and as the music reaches a crescendo we zoom onto the face of the throne’s occupant – Patrick Moore. Suddenly there’s a crash of thunder, the screen whites out, and in the place of Patrick Moore’s sage visage is the word ‘GamesMaster’, with the ‘M’ picked out in florid gothic script.]

[Cut to the inside of what appears to be some kind of cathedral. Wild cheering erupts from the assembled audience as the camera swoops towards a figure dressed in a red sports jacket and crisply ironed white trousers. The look is topped off with floppy hair and Lennon glasses.]

[The excited cheering dies down and Dominik turns to camera 2, hands clasped earnestly.]

DD: And without further ado, let’s go over to GamesMaster to find out tonight’s challenge!

[The be-monocled face of the renowned astronomer and (supposed) games expert Patrick Moore fizzes into life on the screen, topped by some kind of metal cowl that looks like it was knocked up on an Amiga in someone’s lunch break.]

GamesMaster: Greetings! Tonight’s challenge is on the gore-fest Mortal Kombat II. The pugilists will have 1 minute to inflict as much damage as possible on their opponent. Extra points will be awarded for brutality!

DD: Thank you GamesMaster! So let’s meet tonight’s opponents – Jet from Gladiators and The Bloke From 2 Unlimited!

[Wild applause accompanied by industrial music. Jet and The Bloke From 2 Unlimited walk down the aisle of the church, escorted by two monks. Jet is wearing her Gladiators costume and looks slightly uncomfortable at being surrounded by an audience of leering 14-year-old nerds. I’d describe The Bloke From 2 Unlimited but no-one can actually remember what he  looks like. Let’s face it, he wasn’t the one you were looking at in the videos. The challengers take their seats. Dominik moves into what appears to be an altar and stands next to a man wearing a garish bandana and a hoodie.]

DD: And with me as always in the commentary box is Rad Toon from Mean Machines magazine. So Rad, can you give the contestants some advice?

Rad Toon: Well, what they’ve really got to focus on is moving their characters next to each other and pressing the punch or kick buttons. The real experts, like me, can use secret combinations of button presses to unleash what we in the industry call ‘special moves’, but perhaps we shouldn’t get ahead of ourselves.

DD: And what about fatalities? Do you think we’ll see any of those today?

DD: OK, thanks Rad, let’s go over to the contestants. Jet, The Bloke From 2 Unlimited, you have 1 minute to pound your opponent into submission, starting… NOW!

[Wild cheering as the fight begins. The Bloke From 2 Unlimited is using Kung Lao and immediately unleashes a special move, flinging his razor-edged hat across the screen and causing Jet’s character, Scorpion, to spout fountains of blood. Jet looks down at her controller in confusion and starts pressing the A button repeatedly. The she laughs a bit – a rather self-aware laugh, as if she’s feeling suddenly awkward. She has clearly never played a computer game in her life.] 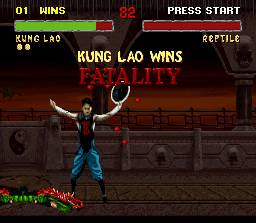 RT: Jet is using some classic Mortal Kombat tactics here, repeatedly pressing one button to create a flurry of fists that’s all but impossible to penetrate. But wait! She’s switched tactics! Now she’s making a stealthy retreat by running in the opposite direction from her opponent and just crouching in a corner… Ah, but The Bloke From 2 Unlimited has seen through the ruse and is just kicking her repeatedly… Jet’s trying a new tactic – she’s put down the controller and has starting doing her hair in an effort to confuse her opponent. But it hasn’t worked! The Bloke From 2 Unlimited is doing something with the controller… the screen’s gone dark… wait, what’s Kung Lao doing? Oh my God he’s sliced Scorpion in half! I didn’t know you could do… I mean, of course, the classic Kung Lao fatality, it’s what I always do when I play against my games expert friends. Who I always beat, by the way.

DD: Thanks Rad, now let’s go over to the contestants. Jet, what happened?

Jet: Did I lose? I thought I was the other one!

DD: And on that bombshell it’s time to go over to GamesMaster for the Consoltation Zone.

[Cut to a dodgy-looking CGI room. A short, rotund child with glasses materialises in front of the GamesMaster.]

Rotund Child: [Speaking with lisp] GamessssMaster, how do I get infinite lives on Joe & Mac: Caveman Ninja on the Sssssuper NESSS?

[Before you can hear GamesMaster’s wisdom on the subject, a shout of “TEA’S READY!!!” echoes from the kitchen. You press the television off switch and GamesMaster’s Amiga-generated face shrinks to a white dot in the middle of the screen.]