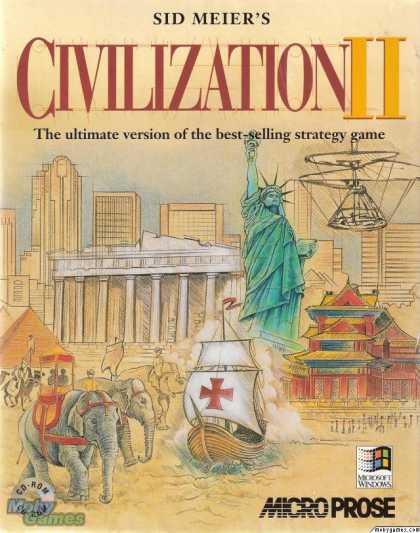 One of the great difficulties in writing this blog has been picking just one game to represent its respective series. This is especially tricky if ‘the best’, ‘the one which we played the most’ and ‘the original’ are actually all different games in the series. Argh!

I faced this problem before, when trying to decide which Resident Evil game to write about, and I’m having the same debate with myself about which Civilization game to cover. The thing is I… is love too strong a word? No, it’s not. I love the Civilization games. The late, great Sid Meier (N.B. at time of writing, not actually dead) created something very special when he came up with the idea of Civilization (it either came to him after he got a bang on the head while fixing a toilet or stole the idea from a board game, can’t remember which). 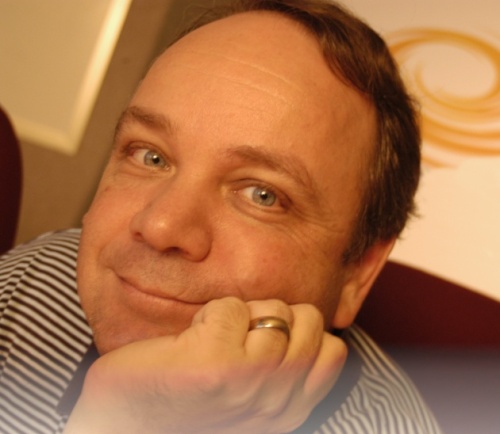 I think I’ve played six different Civilization games over the years, and I’m not even counting the various add-on packs and downloadable content. Collectively I’ve probably spent more time playing Civ (get with it Grandad, that’s what we kids call Civilization) games than any others. Deciding which one to cover for this blog has not been easy and, again similar to Resident Evil, I put the decision off as long as I could. With only four slots left on the blog my hand has been forced and, after careful consideration, I’ve decided to write about the one I probably played the most and returned to the most often – Civilization II.

By the way, despite being English and becoming increasingly annoyed by how American spellings are creeping into general use in the UK (it must be my age), I’ll be using the US spelling of ‘civilization’ rather than the actually-correct-as-we-invented-the-language civilisation, as that’s the spelling the games use. When I was a kid and had the first Civ game on the Amiga I made a big thing about spelling it ‘Civilisation‘ not ‘Civilization‘ on the labels of the copy disks I made. I was, as has been established in several other posts, a strange child.*

The premise of Civilization is that you control a nation/civilization for 6000 years of history. It is a massive, sprawling game in which you start with the founding of a small city state, often not even having invented the wheel, and can end up with a continent-spanning empire, putting people on the moon and nuking your neighbours.

I got the first Civ game for my Amiga 1200 sometime in 1993. Despite the simple visuals the 12/13-year-old me was instantly hooked. The game’s genius lies in how it starts off relatively simply and gradually becomes complex as you play it. Initially you just have to choose the location of your city, and then decide what unit or building to make. Easy.

The first Civilization. Looks like the German's are doing well.

After a couple of hours’ play you might have adopted a monarchy, hit the middle ages and have six or seven cities. Suddenly there’s a lot more to worry about. What’s your tax rate? What technology are you going to research? Do you change political systems? You’ve just met the Russians, should you attack them or try to build an alliance with them? Hang on, the people in one of your cities have started to riot! Do you send in the troops or build a temple to try and make them happy?

Five or six hours later you’d have become a republic and have a dozen or more cities. Your civilization has grown but now you’re in the middle of a nasty war with the French which you seem to be losing despite your new musketeer unit. By the eighth hour you’ve defeated the French, turned Communist, cured cancer but lost the space race against the aggressive and technologically advanced Zulu Empire.

Still, unlike the real world, if it all goes wrong you can start again and try to get it right. Before you know it you’ll be shouting at your pixelated army “Repel the Mongols you cowards” and renaming the recently conquered Berlin after youself. Ianstown does have a ring to it… 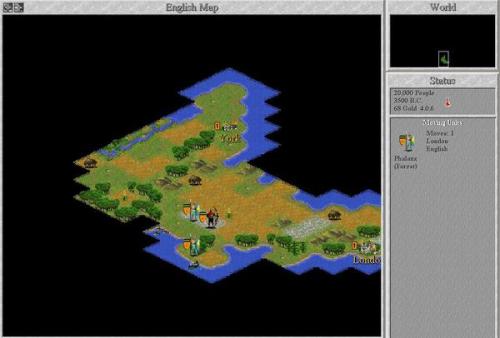 Early in the game. Looks lonely for the English.

One game could last days, and the sheer complexity of Civilization meant that each time you played it the experience would be slightly different. Wiped out by an invading Aztec army in 1457? Simply start again and try to get it right.

1996’s Civilization II took all that was great about the original and added so much more. Graphically the game was obviously vastly better, with an isometric viewpoint and a much more intuitive interface. The world map became larger, with lots more civilizations to play as (ever wondered who would win in a fight, the Vikings or the Egyptians? You can see in Civ II). The military side of the game is also much better. In the original Civ you occasionally had tanks beaten by archers and other slightly ridiculous things like that. Now units have ‘firepower’ and ‘hit’ points. Y’know, just like in real life!

One nice touch was the videos of advisers telling you what to do. The help they gave was minimal, pretty much asking you to concentrate on whatever area they represented (military advisor asking for more military units, economics advisor asking for more banks or market places), but for a game that in many ways was so serious, it was good to have some amusing (well, amusing the first couple of times you saw them) bits. I especially liked the Elvis guy, and the way the advisers’ costumes changed through the ages. When your Civilization was in a state of anarchy they even argued:

One innovation that Civ II introduced, and that all subsequent Civ games have had, is having different ‘scenarios’ – WWII, Fantasy Kingdoms, etc. Civ II also allowed you to create game scenarios and soon there were hundreds of fan-made ones online. My favourite was a steampunk one where you could control the Anglo-French Empire and take on the ‘Evil Society’ led by Fu Manchu. There was even a War of the Worlds-esque Martian Invasion half way through the game.

The Civilization series is the crack-cocaine of games, with a ‘just one more go’ aspect that I’m sure has led to all sorts of missed appointments/late homework/failed relationships. This is despite some pretty slow loading times. Civ II wasn’t so bad, but the original Civilization? Towards the end of the game, when your Empire would be pretty big, you would sometimes have to wait nearly 10 minutes between turns.

The games are especially appealing to people like me with a God/Napoleon complex. If only humans had always had this game, I really feel it would have saved our race a lot of bother. All those dictators and mad men who have caused so much misery because of their lust for power… If only they could have played Civ II, they would have just sat in their bedrooms, living out their power-crazed fantasies virtually.

Half the fun was creating an entire alternate history for the world. Remember the great Greek Empire across 19th Century Europe?

I sometimes worry that without this game I would end up seizing power and MAKING EVERYONE PAY. Ahem. Don’t worry though, even if this does happen I’m a pretty good ruler, conquering the world as a communist before creating a worldwide democracy. Doesn’t sound too bad does it? See my Syndicate post for more evidence of my disturbing dictator tendencies.

I got a good 8 or 9 years of play out of Civilization II. Not many games you could say that about. I bought Civilization III but it seemed overly complex to me, and I returned to the simple elegance of II. It wasn’t until I got Civilization IV in 2006 that I felt ready to leave it behind. I’ve not played Civ V, though my brother has and he’s not impressed, so I’ll probably stick with IV for now.

If you treat the series as one game then I would say it’s the best game ever. Really. It’s addictive, has incredible depth, and has taught me all sorts about history and ancient civilizations (I first learnt about what happened to the Aztecs, the Manhattan Project and Ironclads from Civilization). It also manages to realistically reflect real-world politics. For example, in Civ IV I often found myself starting wars because I wanted access to oil a rival had in its territory. They should play it in schools! Though it might lead kids to think Cardiff had pyramids…

To finish, here’s a description of a particular game of Civ II I played years ago, taken from an old blog of mine. Enjoy!

I dug Civ II out the other day on a whim. I decided to be the Japanese and play on the ‘real’ world map (as opposed to a world the computer randomly makes up). I didn’t do very well. I made some elementary mistakes which meant that I fell well behind in technology compared to other civilisations (especially the Greeks curse them). I ended up having a pointless war with the Chinese which gave me a bad reputation with the rest of the world, then accidentally angered the Greeks who conquered half of my territory with frightening ease. I gave up when it became obvious that I was on the brink of becoming a 4th rate power in the world, appeasing the massive Greek Empire and their Chinese lapdogs. I refuse to live in a world like that!

I named one of the Japanese cities on the Asian mainland after Lewis (Lewisville?). It was one of the first to fall against the Greeks. I blame him and his cowardly city on my eventual defeat. I will make him suffer for your betrayal.

Hmmm, writing that reminds me of this bit from Red Dwarf…

*[Lewis puts on his copy-editor hat and attends the lecturn.] Actually, ‘-ize’ endings have been in use in British English since the 16th century, and are derived from Greek (whereas ‘-ise’ comes from French), so they’re not merely an ‘Americanism’. Also, the OED usually lists ‘-ize’ endings first, although it takes great pains to point out that ‘-ise’ is an “equally correct, alternative spelling”. Having said all that, I still prefer ‘-ise’ endings, even though I spend all day at work changing them to ‘-ize’.