Well of course Mario had to find his way onto the list somewhere. 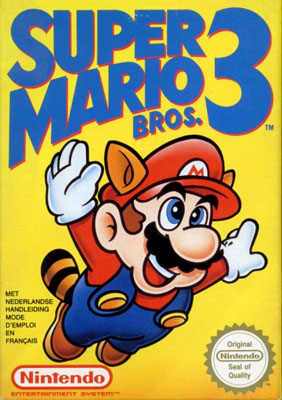 Super Mario Bros. 3 is one of the best selling video games of all time*, and with good reason – I can’t think of many games that managed to steal away my spare time so effectively and ruthlessly over such a long period. In fact, I think I could safely say that this is the first game that I was ‘addicted’ to: my sister and I could become utterly transfixed by it for hours, only stirring to take on sustenance and perform essential ablutions.

As a sequel, it surpasses the previous two games in every respect, not least graphically. I mean, compare this: 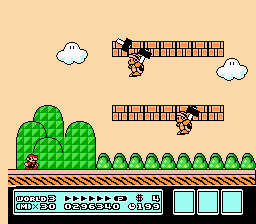 with a screenshot from the original Super Mario Bros.: 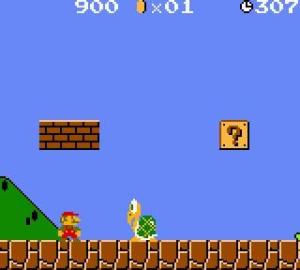 and I’m sure you’ll agree there was a huge improvement all round.

Another innovation was the map screen. Gone was the old spectre of linear game progression – now you could choose the route you took through the game (well, to a limited extent anyway). Further innovations included the raccoon suit, which enabled Mario to fly (obviously) and added a certain verticality to the level designs. This was just one of the many guises Mario adopted though – my favourite was the level where he climbs into a sort of green clockwork sock, which allows him to cross spikes. 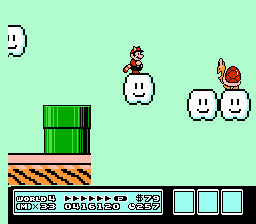 I think my favourite part of the whole game was World 4 – Giant World, where everything was huge (natch). A simple concept yes, but there was something endearing about jumping on giant Goombas and battering walls with enormous Koopa shells. 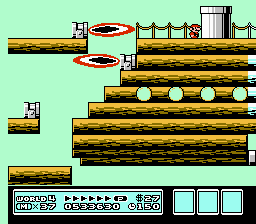 Then there were the flying ship levels that cropped up throughout the game, culminating in a giant flying ship at the end and an army of wooden ‘tanks’ – more examples of the nuggets of imagination that flew out of this game like money flying out of an Icelandic bank. 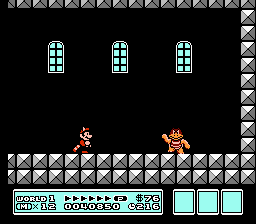 However, there was one big problem with Super Mario 3 – the lack of a save game. This was rectified in the version released as part of the Super Mario All Stars game on the Super NES, but in the original, once you turned off the console, that was it. In a game as complex and huge as this one, it was heart-breaking to flick that OFF switch and know that next time you played you’d have to start all over from the beginning.

This meant that it was almost impossible to complete the game, unless you used the ‘warp whistles’ to skip several worlds. I remember that once my sister and I tried to finish the game in its entirety – we played for hours, taking it in turns to finish each level, but we still ran out of lives before we reached the end.

I think this kind of sado-masochistic gameplay is indicative of the ethos of many games at the time – it was almost accepted by gamers and game designers alike that the player would be punished for failing, but that they would keep coming back for more anyway. Of course, the lack of a save game was partly due to technical reasons – the NES console had no save memory of its own, so cartridges had to be built with ‘battery back-up’ in order for a save function to be included, and many publishers sought to avoid including this costly extra in their games. Even so, you’d think Nintendo might have wanted to push the boat out a bit for this particular game – I mean, considering it was one of the best-selling games of all time, you’d think they could at least afford to include one little battery in the cart. 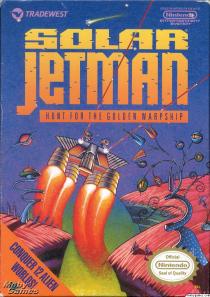 There were other ways around the save game problem too. Many games, such as Solar Jetman, used a password system to let you skip to the last level you played with approximately the same amount of lives that you finished with. Of course, it meant having to carefully keep various lists of passwords on scrappy bits of paper – lists that were often prone to being ‘tidied’ by overzealous mothers – but it was better than having to start at the beginning every time.

It’s very different nowadays of course, and even the idea of a game that you can’t save seems faintly ridiculous. More than that though, the ethos of game design has moved away from punishing the player to constantly rewarding him or her. Even the concept of ‘lives’ is becoming old hat; ‘lives’ were originally implemented into arcade games to limit the amount of time the player could use the machine before inserting more money, but this makes no sense for console games. Indeed, many games, such as the new Prince of Persia, have now abandoned the concept of ‘dying’ completely, and seem no worse because of it. 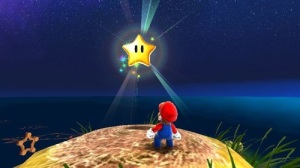 This is something that the designers of Super Mario Galaxy (Nintendo Wii) seem to have realised – the player is showered with so many extra lives that the whole concept of even having ‘lives’ seems pointless. It wouldn’t surprise me if the next Mario game does away with the idea of lives altogether.

Anyway, despite the possible overtones of sado-masochism (see above), Super Mario Bros. 3 was, and still is, a delight to play. Click on the video below to see the first level in action and I guarantee your eyes will glaze over with nostalgia as soon as you hear the first bar of that music…

* SMB3 sold 18 million copies, being surpassed only by the original Pokémon games. Technically, the original Super Mario Bros. is actually the best selling game of all time, but since it was given away free with the NES, it doesn’t really count. Hey, them’s the rules.