You know a game is good when you just can’t stop thinking about it. Half-Life 2 was pretty much the only topic on my mind for the whole time I was playing it, and it preoccupied my thoughts for months and months afterwards. There’s just one word to describe it – amazing.

Half-Life 2 was amazing because it showed people that games could reach heights of entertainment, interaction and storytelling that just wouldn’t be possible in any other medium. The story has the slickness and polish of the best action films, but with the added benefit that you – as the voiceless Gordon Freeman – are the one who’s controlling it (or at least the game makes you feel as if you’re controlling it). Not only that, Half-Life 2 did a fantastic job of letting the environment do the storytelling, rather than relying on lengthy, potentially dull cut scenes. As you emerge into the devastated City 17, your first glimpse at the alien, impossibly tall monolith that towers above it gives you all the information you need to know in one glance.

The first appearance of the alien monolith. I think most of the screenshots here are from the PC version, but the Xbox version is much the same (although a little less pretty).

In my opinion, the game’s greatest triumph was its characters. The acting is some of the best I’ve ever seen in a video game, and the characters – particularly Alex – draw you into their story in a way that I’ve yet to see bettered. Half-Life 2 very deliberately avoids the use of cut scenes – you’re in control the whole time – and it’s a testament to the power of the story that I hung on every word the non-player characters uttered, rather than blithely ignoring them.

Shock horror! A computer game in which you actually care about the characters! So if Valve can do it, why can’t everyone else? 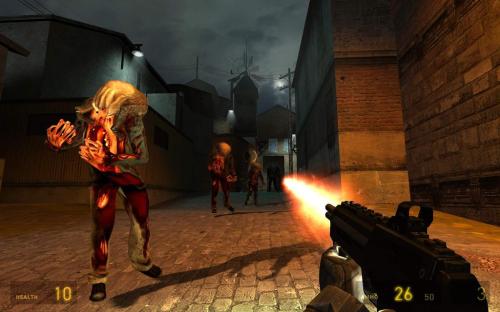 Then of course there’s the real-time physics. Who’d have thought physics would suddenly become so interesting? For years after Half-Life 2 was released, developers clamoured to stick new and improved physics engines in their games, all because some bright spark at Valve invented  something called the Gravity Gun.

There’s nothing quite as satisfying as grabbing a nearby bin with the trusty old GG, carefully lining it up at a row of oncoming soldiers, then unleashing it with the force of a 1,000 Geoff Capes, knocking your enemies down like skittles. Finally, a worthy successor to the BFG as gaming’s Most Satisfying Weapon.

The walkers were deadly, but brilliant. Anyone remember The Tripods?

And I haven’t even mentioned the sound yet… The inhuman electronic gurgle of the enemy soldiers can be heard long before they’re seen, and it instantly puts you into a state of high awareness as you edge around corners. It’s a brilliant sound effect, carried over and improved from the original game, and whenever I think of Half-Life 2 it always pops into the back of my head. Even if I don’t want it to. Brr.

I could go on all day about how amazing this game is, but I think I’ll end by saying that Half-Life 2 was way ahead of its time – it showed that engaging storytelling and intense action don’t necessarily have to be mutually exclusive concepts, and it set a benchmark of gaming excellence that, frankly, has yet to be reached by most of the games on the market today.

Now witness the genius of the Gravity Gun: