It’s been incredibly difficult to decide which games to cover for the final few places on our list, and dozens of equally worthy titles were considered for this particular spot. In the end though, I felt that this almost unknown GameCube title thoroughly deserved a place on the list: not least because I think more people should find out about it.

The utterly dreadful cover art for Lost Kingdoms. There's definitely something not quite right about the proportions of that woman's face...

Lost Kingdoms made my life slightly better because it’s one of the few games I can think of that I enjoyed from start to finish – there were no frustrating difficulty spikes and no tacked-on ‘stealth’ sections, just pure, unadulterated fun from the moment I picked up the controller to the moment I watched the credits roll. Admittedly, the time in between the two wasn’t particularly long, and this is probably the game’s biggest flaw – it’s far too short. However, this isn’t necessarily a bad thing – particularly if you’re an older, time-poor gamer – and considering the game can now be picked up on eBay for an absolute pittance, you’d be mad to miss out on it. 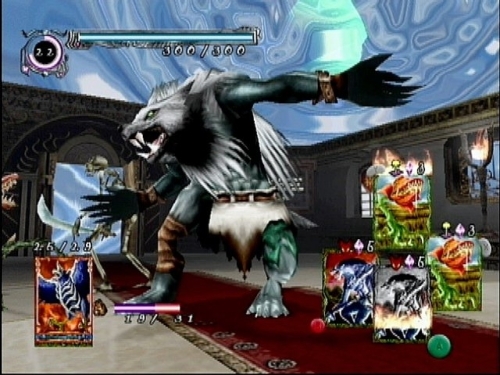 The cards in your hand are on the right, and the rest of the deck is shown on the left.

The key to the game’s success is its innovative combat system, which is based on ‘Magic: The Gathering’-style trading cards. Each card summons a specific creature, which either performs a one-off attack or hangs around for a while and attacks any wrongdoer that ambles by. All of the cards have specific affinities (Fire, Earth, Wood, Water), and part of  the game’s enjoyment comes from carefully preparing your deck before a level to ensure that you have the right balance of cards to fight the upcoming monsters (e.g. if you’re going to be facing a lot of fire-breathing monkeys, it’s probably a good idea to bring along a few water-based cards).

The best thing about the game might just be conjuring up a host of Harryhausen-esque walking skeletons. They're fairly rubbish in battle, but they evoke fond memories of Sunday afternoons spent watching Jason and the Argonauts.

The best thing is that all of the fighting is done in real-time, so the fights can get enjoyably frantic as you sift through your deck, trying desperately to find the right card to deal with the monster that’s just jumped up through the floor in front of you. The creature cards themselves are also impressively designed, and there are some particularly good showstopping animations for the more powerful beasts (á la the Guardian Forces in Final Fantasy). Best of all, there are around a hundred different cards to collect, and you can also upgrade your cards by ‘transforming’ them, so there’s plenty of fun to be had for the compulsive collector. 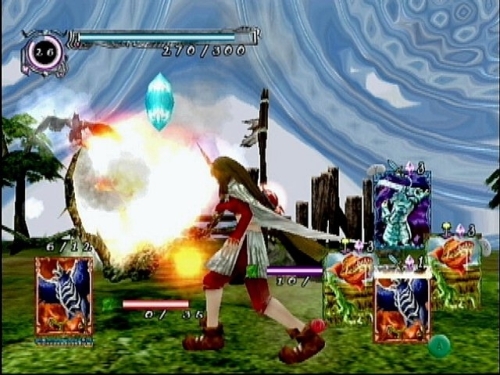 You can see the main protagonist in the centre - she's certainly up for the worst-dressed-hero award. Are those booty slippers?

Speaking of which, isn’t it weird how obsessive collecting has been such a part of video games since the very beginning? From collecting coins in Super Mario Bros. to finding Riddler Trophies in Batman: Arkham Asylum, it seems gamers like nothing more than to gather pointless tat for hours on end – although to be fair, the cards in Lost Kingdoms are a little bit more interesting than many game collectibles.

I think the worst example of pointless collecting I’ve witnessed in recent history was Assassin’s Creed, which tasked you with collecting several hundred flags of various types. And what did you get for painstakingly collecting these flags? A poxy little Xbox ‘Achievement’ and the knowledge that those five hours spent trawling through every street and alley in Jerusalem are five hours you’ll never get back.

The thing is though, I get totally suckered in by these collecting quests: once you’ve started collecting these little in-game trinkets, it’s very difficult to stop. Assassin’s Creed was definitely a watershed moment though – receiving the ‘Achievement’ for collecting god knows how many flags was the point at which I seriously asked myself “What the hell am I doing?”

Still, certain games handle item collecting well, and because it kept the number of collectibles down to a reasonable level and made each item unique and interesting, Lost Kingdoms was certainly one of the better ‘collect ’em ups’ (another good example is Ghostbusters: The Video Game – the ‘haunted artefacts’ scattered throughout the levels were genuinely worth finding).

To sum up then, Lost Kingdoms is a cracking little game that’s well worth picking up if you’re in the mood for a spot of RPG-lite collecting and card battling, and its relative shortness means it’s guaranteed not to outstay its welcome – definitely one of the GameCube’s high points.

To whet your appetite, here’s a video of the first level:

And below is a video of the final boss battle – it gives you a good idea of what some of the higher level cards do. (But don’t watch if you don’t want to see the ending. Obviously.)

Filed under 2002, From Software, GameCube, RPG