The Atari 2600 Junior was my first games console (the ‘Junior’ was the later version without the fancy wood panelling – that’s right kids, games consoles used to be made out of wood). It was a hand-me-down from my uncle sometime in the late 80s – he’d upgraded to an Amiga I recall – and I inherited half a dozen games along with the console itself. One of these games (and the best one by miles) was Centipede. 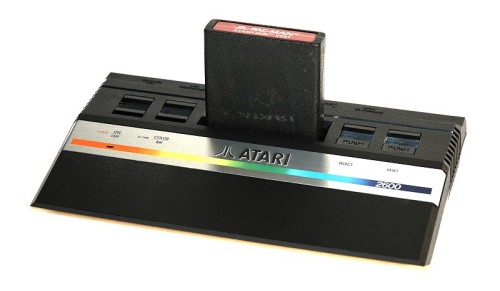 The quality of the games I had for the Atari 2600 varied wildly. If you were to trawl through the multivarious retro-gaming websites on the web, you could be mistaken for thinking that the 80s was some sort of Golden Era for video games, with bedroom coders churning out mini masterpieces almost weekly. This was obviously not the case. Yes, there were some truly excellent games produced in this period, but there was also a helluva lot of practically unplayable tosh. I believe – and feel free to argue with me on this one if you like – that games nowadays are generally of a much higher standard than they’ve ever been before, partly due to higher production budgets (and therefore an added impetus to succeed on the part of the developers and publishers – produce a poor, badly selling game and you could lose millions) and partly due to higher levels of complexity, which means that games require more involvement on the part of the player. Back in the old days, games tended to be one-trick ponies, consisting of a single concept that was repeated endlessly (think of Asteroids: move ship, shoot asteroids, repeat). The upshot of this is that if the central concept was weak, then the entire game was flawed.

One such flawed game was Realsports Boxing. I remember playing it with my sister quite a bit because it was the only two player game I had, but boy was it bad. It basically amounted to mashing the punch button as fast as you could until your opponent fell over – and that was about it.

Centipede, on the other hand, despite it’s relatively simplistic graphics, managed to cram in some surprising complexity. Not only did you have to shoot the centipede as it raced down the screen towards you, you were also faced with several other types of baddie with various tricks up their various sleeves. The scorpion, for instance, would skitter about the screen poisoning mushrooms, and if the centipede touched any of these poisoned mushrooms it would head straight for you.  Likewise, the flea would drop extra mushrooms across the screen, meaning that the centipede would be more likely to rebound off them and head closer towards you. All this meant that you were constantly trying to prioritise among shooting the centipede, the baddies and the mushrooms, making for some frantic play sessions.

One thing that always frustrated me about games back in the 80s (and indeed the 90s) was the huge discrepancy between the picture you got on the front of the game box and the actual game itself. I mean, look at the box above and then look at this:

It’s a call to the Advertising Standards Agency just waiting to happen.

Of course, there’s something to be said about the way these simpler graphics encouraged you to use more imagination to fill in the blanks – and indeed, the manual for Centipede was a hotbed of artistic licence:

“You’re trapped in the perilous Enchanted Forest. Dark, dangerous mushrooms push up through the forest floor, snaring you on every side. Threatening thumps and evil buzzings fill the air. Something slippery flashes through the mushrooms, moving in on you. Suddenly, glaring eyes and quivering antennae jump right out at you! It’s the Centipede — and it’s attacking!” (from http://www.atari.com)

I think that’s what really appeals to me about this game. Although an excellent game in its own right, it reminds me of a simpler time: a time when joysticks only had one button and when games didn’t take up whole evenings of your life just to get through the tutorial. Was it a better time for games? Arguable. But it will certainly be fondly remembered. 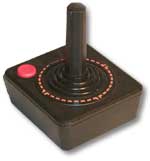 PS.  I know they’re iconic, but those Atari joysticks were really rubbish, weren’t they? The rubber had a habit of drawing out hand sweat in a way that I’ve never since encountered in a gaming peripheral…