Yep, it’s Mario again, making his triumphal third appearance on 101 Video Games (after cropping up in Super Mario Bros. 3 and Super Mario Kart). I’m a big fan of the Mario games (who isn’t?), and Super Mario Galaxy is, in my opinion, the finest Mario game ever made.

There was a lot riding on the Wii incarnation of Mario – many people felt Nintendo had dropped the ball somewhat with Super Mario Sunshine on the GameCube, so Galaxy was Nintendo’s chance to restore Mario’s reputation. The trouble with Sunshine was that it didn’t really feel like a Mario game – partly because of the holiday location and partly because of the unnecessary introduction of the FLUDD backpack. It was telling that the most enjoyable levels in Sunshine were those which disposed of the backpack entirely and relied instead on good-old-fashioned, Mario 64-style platforming. So what would Nintendo come up with for Galaxy? More innovations? Or the return to old-school platforming that the fans craved? 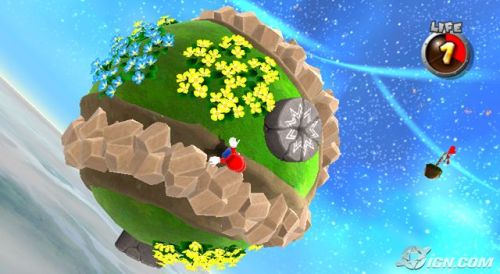 Well, a bit of both actually. The actual platforming in Galaxy goes right back to Mario 64 for its inspiration – the triple jump, long jump and ground pound are all present and correct, and the whole feel is much more reminiscent of the game’s noble N64 forebear than its slightly awkward GameCube cousin. However, although the basic platforming mechanic is the same, in all other areas the game is totally chock-full of new and innovative ideas, and it’s such a big leap forward for the series that it makes you wonder where on earth Nintendo will be able to take Mario next.

One of my favourite gaming moments of all time is the first level of Mario Galaxy. Circling around the tiny planetoids and firing yourself into space with the star cannons is brilliant fun – it put a big ol’ grin on my face that pretty much stayed there for the entire time I played the game (and for sometime afterwards, too). And the fantastic ideas just keep coming – levels where the gravity keeps reversing, a galaxy made out of children’s toys, a bumblebee suit that lets you fly… there’s more imagination in one level of Mario Galaxy than in most entire games.

Of course, there are one or two minor niggles. The ‘rabbit catching’ section right at the very beginning is a little irritating – and surprisingly hard. In fact, when I was showing the game to a friend, I actually had to catch the rabbit for them because they found it too difficult – not a good sign considering Mario is meant to be accessible to everyone. Conversely, quite a large portion of the game is almost too easy; although having said that, some of the last few levels are devilishly difficult (see the article I wrote for Terminal Gamer here).

These are minor gripes though – Super Mario Galaxy is without doubt one of the finest games I’ve ever played, and certainly reason enough to buy a Wii if you haven’t done so already. I hardly ever play through a game again once I’ve finished it, but on completing Galaxy my first instinct was to go right back to the beginning and play it all through again… and it’s even better the second time around.

Some highlights from the game:

One response to “#51: Super Mario Galaxy”