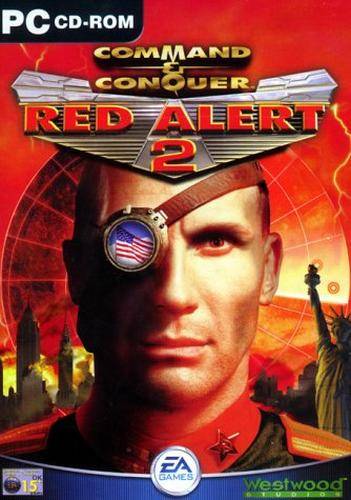 Ok, before I justify such a bold statement (I’m sure there are literally… 6 furious people right now) a bit of background. C&C: Red Alert 2 is a sequel to, unsurprisingly, C&C: Red Alert, itself a spinoff to the original Command & Conquer games. The C&C series are real time strategy (RTS) games. Essentially you build a base, collect resources, build an army then attack. A simple idea but when done well RTS games are as fiendish and tactically minded as a game of chess (note – I don’t play chess).

Set in a more or less separate universe to the first Command & Conquer, Red Alert depicts a world where Hitler never rises to power (somehow he’s stopped by a time travelling Albert Einstein – no, really). Instead of WWII we get a war with Stalin’s USSR. The suggestion is the people of the world just really wanted a war in the 1940s. Good thing there was another totalitarian one party state led by a psycho with a moustache. Otherwise we’d have just got bored. You play as either the Allies, pushing back the massive Red Army and defending freedom, or as the Soviets, bringing the revolution to the capitalist pigs of Western Europe.

Red Alert 2 is set a few years after the first game (in a world where the Allies won) where the Soviet Union still exists under the rule of Allied puppet leader friendly to the West. Except he’s not! He’s just pretending you imperialist idiots, and before you can say Fyodor Dostoyevsky there are Zeppelins in the skies above New York and Soviet tanks rampaging through Texas. The Cold War just got Hot.

I’ve always loved the C&C games. I was there at beginning, getting the very first C&C game on, slightly bizarrely, the Playstation (alright, I know technically Dune 2 was first but I never played it so it doesn’t count). One of my all time top gaming moments is the end of the NOD campaign where you get to decide which famous monument to destroy (for patriotic reasons I always went for the Palace of Westminster). Of course the gameplay is great, yadda yadda yadda but C&C games are known for their full-motion video (FMV) cut scenes.

FMV was already a bit of an oddity by the time of Red Alert, with most games preferring to use CGI intros and cut scenes. It was cheaper and I’m sure many designers probably felt they were less jarring than video scenes. But the FMV makes those games. In Red Alert 2 they are over the top, bombastic, ludicrous and hilarious they totally bring you into the games. Just watch the intro above. How can you not love a game which opens with an American President talking to an intern who looks suspiciously like Monica Lewinsky?

The C&C games which, to me, have been the weaker entries to the series are C&C: Tiberium Sun and C&C: Generals, and I put this down to the lack of/poor FMV. Generals dispensed with FMV cut scenes entirely and while Tiberium Sun still had them, the characters in them did not talk directly to ‘you’. For me at least it really made a difference. It made  playing the game a strangely detached experience.

Red Alert 2 also has the most finely balanced sides in the game, each with corresponding strengths and weaknesses. Being the Allies or the Soviets isn’t just window dressing, you really do play the game in a different way depending on which side you’re playing as. 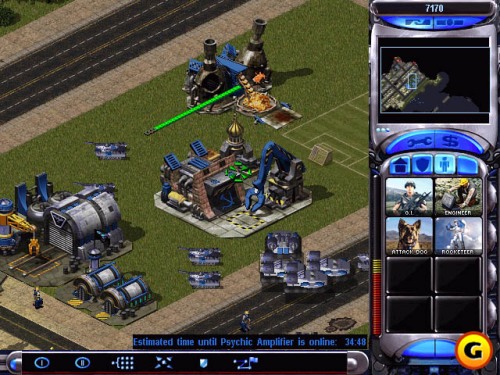 An Allied Base. Quiet. Maybe too quiet...

There are just enough units to make the gameplay varied and interesting, but not too many to become overwhelming. I’m working my way through Red Alert 3 at the moment and while it’s fun they seem to have dispensed depth for variety. Though Red Alert 3 does have a lot more women with big boobs in it than the last ones. Swings and roundabouts. 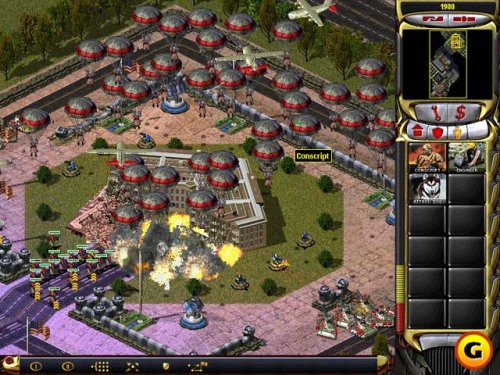 There is a sense of joie de vivre which can be seen and felt throughout Red Alert 2. Considering it’s a war game it doesn’t take itself to seriously, in fact in so many ways it’s stupid. You’re talking about a game where one of the military units at your disposal is a giant squid. Yet Red Alert 2 is a properly satisfying gaming experience.

Now, if you forgive me, I need to dig out my Russian hat and turn the Eiffel Tower into a giant electric weapon again. Or maybe fight for freedom and try to stop the Commies from blowing up the Statue of Liberty. ‘Incoming Transmisson’…

The Settlers has to be one of my favourite games of all time. If you’ve never heard of it, think Age of Empires but with more personality and a lot less fighting – unlike most RTS games, in The Settlers waging war generally takes a back seat to gathering corn and chopping wood  (it’s called ‘The Settlers’ after all, not ‘The Warmongers’). 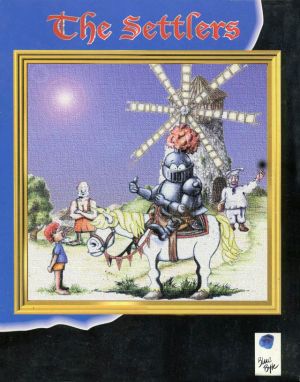 Perhaps the key to this game’s appeal is the graphics. It looked astonishingly beautiful at the time, and even today the game’s looks stand up well under scrutiny, exuding a sort of timeless charm. The tiny people who made up your kingdom were wonderfully animated – as they baked bread, harvested corn, went to work in the mines or even just sauntered along the roads you developed a real affection for them, and this made you all the more determined to protect them from the enemies massing at your country’s borders. 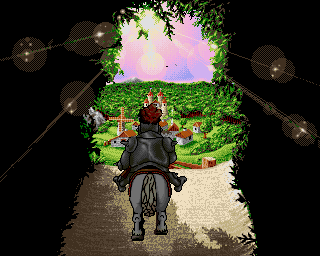 Losing land in The Settlers was heartbreaking. If enemy soldiers captured one of your guard huts, the front line would change, and any of your buildings immediately around the hut would burst into flames, leaving the occupants to hotfoot it back across the newly realigned border. The sight of homeless woodcutters, bakers and sawmill workers flooding over your border from their freshly razed places of work was enough to bring a tear to the eye. Watching the tiny refugees make their way back to the home castle would make me thirst for revenge, stirring me to gather a mighty army and cast down doom upon those cowardly enemies who would commit such a treacherous act, never resting until I had slaked my thirst with the taste of my enemies’ blood. Or something like that anyway. Without the slaking.

However, the best bit about The Settlers was the two-player mode. Perhaps uniquely for an RTS game, you could play split-screen head-to-head, although of course this carries the obvious disadvantage that your opponent can see exactly what you’re up to. Still, having the option to play on one computer was a nice touch, although it was definitely worth the extra effort to link two Amigas together for full-screen play.

Ah, those were the days! Alex from round the corner would lug his Amiga over to mine and I’d struggle downstairs with the spare bedroom telly so we could play Settlers head to head. We’d sit there in a state of rapt concentration, the only sound the frantic clicking of mouse buttons as we sought to strengthen and expand our settlers’ empires. Mum would occasionally pop her head round the door to check we hadn’t died of an embolism, usually bringing with her a plate of Penguins, Viscounts or, if we were particularly lucky, raisin Clubs. Ah, Club bars! Whatever happened to them? “If you like a lotta chocolate on your biscuit…” [Coughs] Hold on, I’ve come over all nostalgia TV clip show…  just give me a second here. 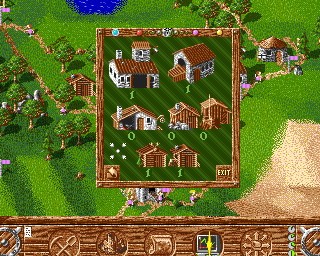 Right, I’m back. OK, so the thing about playing against Alex was that after a while the heartbreaking intensity of burning down each others’ buildings just got too much. I don’t know, perhaps we were both too young to face up to the horrors of war, but in the end we decided to make a truce, of sorts. I mean, after the 100th border-realignment-triggered bakery conflagration there comes a point when you just have to say: “Enough! Do you not care about the little people? Let’s stop this senseless waste! Hey guys, why can’t we all just work together to build a better world?” 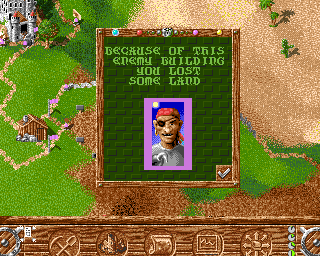 And so rather than fight against each other to dominate the whole world map, we decided to limit our sessions to a time limit and decide who won by comparing the stats for land gained, wealth, corn production, wood production, and so on. OK, reading that back it sounds incredibly – for want of a better word – lame, but it certainly kept us happy. And if you’d only seen all those tiny helpless people fleeing from burning buildings, I think you’d agree with me that it was A BETTER WAY.

[Looks up to heaven as God rays filter through the ceiling, accompanied by angelic singing.]