This is a kind of an embarrassing thing to admit now, but when I first played Wipeout 2097 it seemed one of the most achingly cool things I had ever seen. But I bet many of you felt the same way when you first played it back in the heady days of 1996/97. 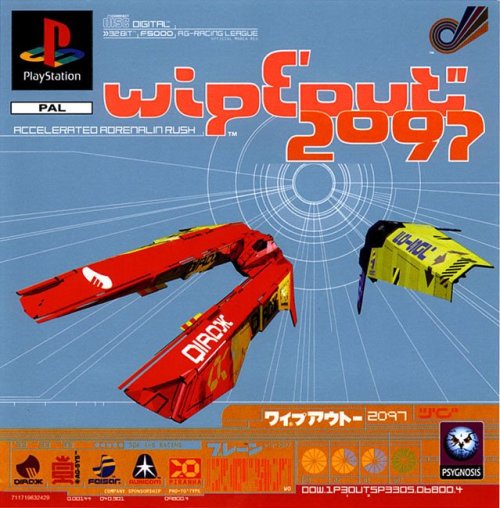 The original Wipeout game was a landmark release for the Playstation. It was the first non-Japanese game for the console. It was amazingly popular, going to number 1 in all format charts. Most importantly though, it was a game that was not for children. It was squarely aimed at an older, fashionable, ‘buying the latest Chemical Brothers album and clubbing at weekends’ audience. Wipeout was developed with that kind of person in mind. It was even promoted in nightclubs! Imagine!

Nowadays of course we’re used to video games aiming for such markets, but back then, along with Playstation’s whole marketing strategy, it felt like a breath of fresh idea and that video games were finally growing up. Wipeout 2097 stuck to the same formula. Of course in hindsight some of those ads and games now look painfully adolescent and end up looking faintly childish, but hey, in 1996 I was an adolescent and easily impressed.

In 1996 we were enjoying the height of Britpop, TFI Friday was allowing us to pretend we were hanging out in a showbiz pub with Danny Baker, we had a young, fashionable, handsome man called Tony Blair who was almost certainly going to be Prime Minister next year and the Playstation had established itself firmly as part of UK youth and popular culture, with Wipeout 2097 as the jewel in its trendy crown. If you wanted an image to symbolise the 90s, it would be a pre-election victory Tony Blair playing 2097 against Ginger Spice in her Union Jack dress, while Chris Evans and Liam Gallagher look on, downing pints.

It had a soundtrack featuring artists like Orbital, The Prodigy, Daft Punk, The Chemical Brothers and many more. You could even pop the game CD into a normal player and just listen to the music. Gosh it was cool.

The game itself was pretty fun too. 2097 was a definite improvement on the first game. The cars handled so much better and there was a weight to the weapons and cars which didn’t really exist in the first one. The courses were crazier and graphics much more impressive. And you could actually destroy other racers. Hah!

Although 2097 was also available on the Sega Saturn and PC it was seen firmly as a Playstation game. Indeed 2097, along with many other games, showed the graphical limitations of the Saturn and helped to seal its tragic, but deserved, fate.

Even though I’m no longer a teenager, not so easily impressed and can recognise cynical marketing campaigns when I see them, there is still part of me that thinks you can’t get any more cooler than the beginning of a race in Wipeout 2097, Firestarter pounding on the sound track and the robot voice counting down the start ‘3… 2… 1… GO’.